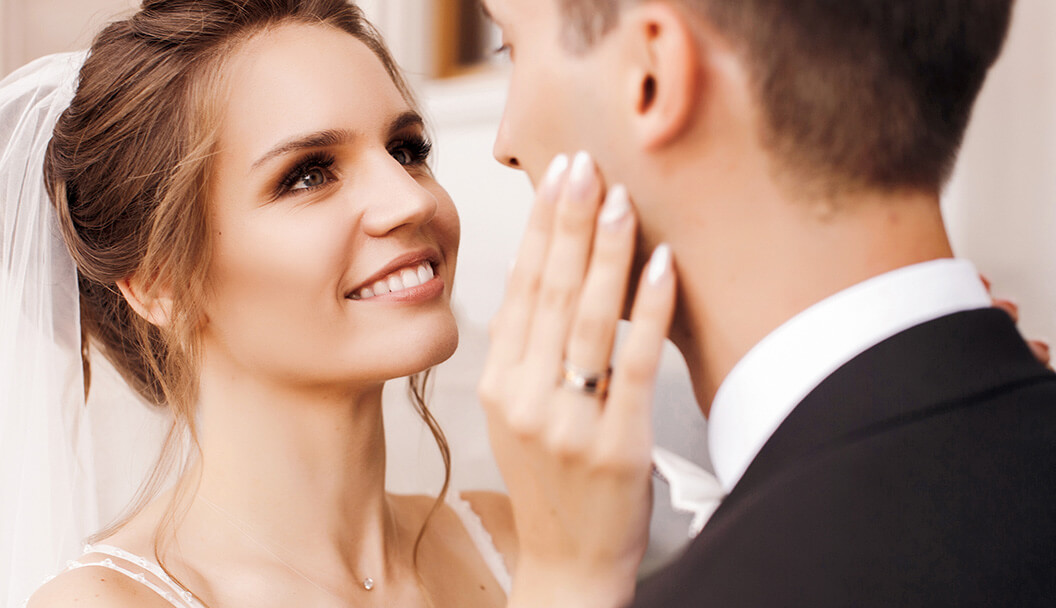 Your wedding day will be one of the most unforgettable days of your life, so what better way to commemorate it and celebrate your bond, than with unique matching wedding bands? Our matching wedding rings are beautifully designed to capture a moment and bring you and your partner lifelong memories of one of the most special days you will ever share with each other.

When you shop at AURONIA you are not only buying the highest quality weddings rings made in Germany. We offer 1-month hassle-free returns and a lifetime warranty on all our rings, so you can shop with confidence. Discover our full range of weddings bands today, and configure them to your exact preference using our ring configurator.

There are other active filters preventing this option from being applied.

AURONIA - His and Hers Matching Wedding Band Sets

We offer a vast range of excellently-designed and expertly-crafted matching wedding rings from various collections. We also offer you the chance to personalise your rings and choose the size, style, finish, but they all share one quality – every single one of our rings exudes classic elegance and modernity.

Our expert manufacturers take great care to make sure your wedding ring set exceeds your expectations and embodies the lifelong unity that you and your partner share.

Our online shop offers a wide range of high-quality wedding rings at great value. The rings are available in different materials and with different finishes. We offer you all kinds of wedding ring sets which differ in style and price whilst retaining superb quality and elegance.

All of the rings we offer are 100% made in Germany. From the manufacturing of the rings by master goldsmiths, to the gems which are set by stone-setters, all steps are performed by qualified professionals at our factory in Germany. Only after a strict, final inspection are the rings ready to be shipped to our customers. We sell our rings worldwide on a large scale, and cutting out all middlemen by distributing them directly allows us to offer you huge savings.

Create the perfect set from scratch

Not only do we offer preconfigured wedding rings but we also offer you the chance to realise your vision of the perfect ring set by allowing you to make customisations. Using our online wedding ring configurator, you can design the ring that your heart desires and that suits your style as well as your unbreakable bond. You can use one of our numerous, ready-made designs and make changes to those, or design your own set from scratch – the choice is entirely yours! The price of the ring also varies depending on what kind of ring you choose.

At AURONIA, you can choose from different purities of gold, platinum and palladium. We offer each of our gold alloys in yellow, white and rosegold. When it comes to the ring finish, there are many ways to add a matt finish to a ring and the result is equally diverse. Whether it's ice matt, sand matt or polished to a high gloss: you are guaranteed to find the perfect ring for you.

Wedding band sets made of gold – a valuable lifelong companion

Gold has long stood for exclusivity and high value (Click here for: wedding rings gold). The rarity of this precious metal and the incredibly limited amount of gold on earth are part of what makes it so desirable and thus a perfect way of showing your loved one how much they mean to you. Gold is also extremely malleable, has a high density and suits any occasion, hence its popularity in the jewellery industry. Finally, gold is especially known for its durability and low susceptibility to wear and corrosion, to which older couples with gold rings can testify. Just like your strong bond, a gold wedding ring will withstand all kinds of external forces to tell a story of a great love.

The classic wedding ring has typically been made from yellow gold for centuries and so this material tends to represent the standard gold wedding ring. The alloy of gold with small amounts of silver and copper is what gives its characteristic warm hue as well as making it tough enough to withstand daily wear. Yellow gold matching wedding bands are therefore ideal lifelong companions which you can find at AURONIA in 8ct, 9ct, 14ct, 18ct and 22ct. Yellow gold rings can be adapted to suit both romantic and modern styles. They remain the classic choice for many couples and are a fitting companion in a long and happy marriage.

Many couples opt to go for the beautifully coloured white gold wedding rings, whose colour is the result of combining gold with palladium and a small amount of silver. This alloy gives rise to a slight discolouration of the precious metal, giving it a very modern and stylish look. White gold wedding rings are available at AURONIA in 8ct, 9ct, 14ct and 18ct. White gold is particularly known for its resilience which is as important in a ring as it is in a great marriage. The white-silvery tone of this material also provides a great backdrop for diamonds and allows them to sparkle and stand out. For this reason, white gold is also commonly used in combination with other precious metals for multi-coloured rings. The fact that white gold ring bands go so well with other colours and that they are especially durable make them a great choice for your matching wedding ring set.

Rose gold wedding rings are gradually gaining more popularity, and rightly so. The warm colour of this alloy, which is obtained by combing gold with silver, copper and zinc, is captivating and will invite compliments everywhere you go. Regardless of your skin type, this material will unobtrusively complement any hand it is worn on whilst looking modern and enchanting. AURONIA offers these rings in 9ct, 14ct and 18ct. This precious material is easy to fall in love with and enchants with its beauty.

Platinum wedding ring sets – a combination of quality and style

Platinum wedding rings attract couples with their lifelong durability and high quality. This material can be worn for years and years without any signs of abrasion and is known for its timeless value. Combining platinum with yellow gold or red gold contrasts nicely to form two-tone rings. At AURONIA we design platinum wedding rings of grades 600 and 950. To increase the strength of your wedding bands, we form an alloy of platinum with small amounts of other metals such as copper, zinc, tungsten, ruthenium and silver, as is common practise among ring manufacturers. A platinum ring will win you over with its white shine, which can be polished to a high gloss, and its’ lack of susceptibility to corrosion.

Palladium is another material which is valued for resilience, as well as being considered a cost-effective alternative to others. Since its discovery in South America in 1803, it has been a part of the platinum group and it continues to impress with its high colour retention, its low sensitivity to scratches and its ability to retain its wonderful shine. Among our assortment you will find wedding rings with purity grades of 500, 585 and 950. Palladium wedding rings are highly versatile and are available in not only classical or subtle designs but also modern or unusual designs. Get matching palladium rings for you and your partner to remind yourself every day of the special and unbreakable love that you share.

Can’t agree on one material? Then why not choose our two tone matching wedding ring set? On your wedding day, you become one with your partner. Similarly, at AURONIA, you can combine your two favourite colours to form one special ring to symbolise this coming together of two souls. With our two tone matching wedding bands, you can choose to combine any of our precious materials to create something that is unique and personal to you and your loved one. Just as in marriage, the two elements fuse together as one whilst retaining their individuality. After choosing your materials, you can customise the design by deciding to add grooves, ridges or stones to make these special pieces of jewellery all the more eye-catching. Your imagination knows no bounds when it comes to designing the perfect wedding ring set which embodies your love.

The history of Wedding Rings

Since its creation thousands of years ago, the ring has been considered the symbol of infinity. As wedding rings, they also symbolize the unity of a couple who have decided to share the rest of their life with each other.

From as long as 21,000 years ago, the Stone Age people of the Bronze age wore rings as a way of expressing their love for each other. At that time, their rings were mostly made of shells, bone or semi-precious stone. The actual wedding ring has been around since antiquity and they were worn by Egyptians and Roman’s who, unlike today, wore them on their left ring finger. This is because it was believed that a vein existed which connected the heart directly to this finger. Wedding rings, then commonly produced from iron, were usually worn only by the woman and served not only to show the couple’s connection but also as a confirmation of the dowry. Inscriptions on the rings were common and Roman’s often engraved the words “Pignus amoris habes”, which translates to “You have the pledge of love”.

Signet rings, which were worn by married women in the Middle Ages, symbolised mutual solidarity. The advent of Christianity brought about an increase in the importance of wedding rings and they came to represent loyalty and stability. Rings gradually came to be more and more symbolic of mutual love and finally found expression in the agreed exchange of rings between partners. This ecclesiastical ritual has been common since the thirteenth century and at that time it already resembled what we now consider a classic marriage. The distinction between a marriage ring and an engagement ring dates back to the 15th century; the wedding ring was often simpler and more classic than the engagement ring – a tradition which continues today. Nowadays there are no prescribed rules of what material a wedding ring should be made of, although precious metals remain popular due to their longevity. It is up to the couple to decide for themselves which material they feel is rightly suited to them and how they wish to individualise them.

If you think you’ve found the perfect wedding ring set but are unsure of your ring size, we are here to help! We offer you the opportunity to order each sample ring in up to three sizes so that you can try them on and check which is the right size for you. The sample rings are made of brass and are supplied without stones or ring finishes. This service is offered free of charge by AURONIA. To find out more information, please click here. Now it’s time to get that lovely matching set you and your loved one have always dreamed of!