A Posy Ring: A Beautiful Tradition for Couples Tying the Knot

A Posy Ring: A Beautiful Tradition for Couples Tying the Knot

Preparing to tie the knot is one of the most special experiences in someone's life. A wedding ceremony, tailored and carefully-crafted to suit the beautiful bride and groom, is a symbol of their unique love and adoration for one another.

But a wedding ceremony is only a small portion of the sheer joy that married life has to offer. In fact, the way in which a relationship develops and grows stronger is a fantastic process.

And after those two lovely words are spoken, a new life begins. One where two people become one. They work together as a team, they grow together, and they know that, through good times and bad, they'll always have each other to lean on.

Which is why wedding rings are such an important piece of jewellery. It's a symbol of everything that two people share - what they've experienced and what's to come.

What is a Posy Ring?

A posy ring, sometimes spelled as "posie", "posey" or "poesy", is a gold or silver ring that has a short inscription on the surface.

The name comes from the French word, poésie, which translates to "poem". This is an accurate name, as this kind of ring contains a short saying of one's choosing, that's engraved.

Usually, posy rings from centuries ago contained phrases of incorrect spelling, and could be anything from religious to romantic, friendly or specific to the relationship shared.

The word "posy" today is mostly outdated, and people tend to call this kind of practice an engraving or inscription.

What's the Difference Between a Posy Ring and a Wedding Ring Engraving?

Not much, in actuality. During the Medieval period, an inscription on a posy ring was placed on the outside of the wedding band whereas today, engravings tend to be placed on the inside.

The shift from the outside to the inside was made, as it was deemed more romantic. The message of love was written closer to the skin, which then felt more powerful for couples in love.

The name "posy ring" gained popularity in the 15th century, but its place of conception and creator, is unknown. It's been said to originate in either Great Britain or France.

Back in the Middle Ages, when religion played a huge part in many people's lives, married couples would inscribe their posy ring with religious texts alongside figures of saints.

Today, the text placed on a posy ring is a way more diverse collection of words, expressions, and short sayings.

Historian, Mary Borchert, reveals this fact by saying that the posy ring has been "continued down through history."

She went on to state: "Nowadays, we don't call it a posy ring but we technically could because it has the inscription inside." 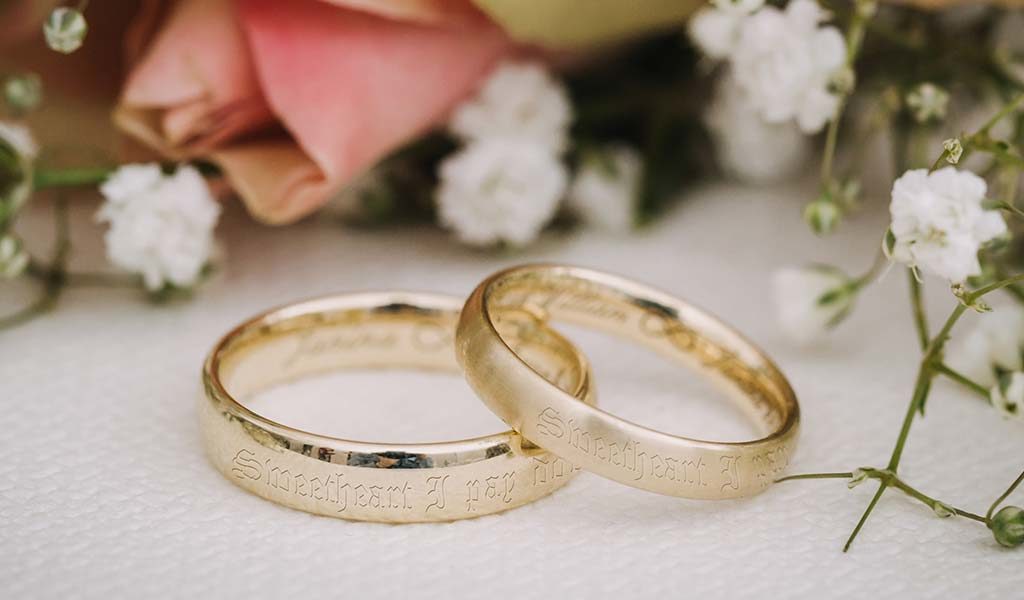 Way back when, phrases on posy rings were written in Latin, Old French or Old English. And until around 1350, the lettering was done using rounded capital letters known as, Lombardic. Later, this changed to Gothic script.

A posy ring often contained either a stone or a jewel, which would generally face inwards so that only the one who wore it would be able to see it.

And contradictorily, while a posy ring was a way for a couple to have something unique, from the 15th to 17th century, goldsmiths used to keep a book containing stock phrases for clients to choose from.

This meant that many newlyweds walked away with the same inscription as other couples in love. At that time, it was mostly educated couples that were able to create their own expressions of love.

Some of these common phrases can be found in the book published in 1917, Rings for the Finger, by George Kunz.

Today, true posy rings from centuries ago are hard to find. The remaining pieces of jewellery are either owned by private collectors or found in museums.

A Sneak Peek into the Origin of the Posy Ring

Centuries ago, wall paintings were found that depicted an Egyptian goldsmith hard at work using a furnace and what resembled a form of soldering, a blow pipe, and copper tongs.

Perhaps the inspiration for the formation of the posy ring? No one really knows.

Interestingly, centuries ago, a posy ring was not only worn by married couples. It was also used as a sign of support between kingdoms and religious houses.

Portraits were found of authoritative figures wearing a posy ring that was gifted to them by their allies. If accepted, the ring would be worn on the left hand, which then symbolized the refrainment from dishonourable acts.

During the late Medieval period, gold rings were set with a spinel (a ruby gemstone), which is a stone of high value. Spinel gems made their way to European locations mostly by trade with Afghanistan, as the country held a vast amount of these mines.

While discovering posy rings from way back when has not been an easy task, there have been a few instances where these gems have been found and studied.

In 2013, a Mr. Simon Harrison from Henlyys in Wales was able to recover a posy ring from the late 16th century or early 17th century, made of linked gold roundels and red, white, and green enamel hearts. The inscribing read, "My heart (symbol) is onely (only) yours".

Again in 2013, a gold posy ring was found by a Mr. David Hughes. This one's inscription read, "Such is my love," and can also be dated back to the 16th or 17th century.

Oftentimes however, inscriptions contained more cryptic messages, like the ones now owned by the Savings Treasures; Telling Stories Project.

One such posy ring contains the phrase, "Forget not the gift," which could be interpreted in a number of different ways. This posy ring was found near Pembrokeshire by a Mr. Tom Baxter-Campbell in 2011.

Another rather cryptic posy ring, discovered by a Mr. T.M. Davies in 2013 near Caerphilly, read, "Keep faith tel (till) death". This ring is said to date back to the late 17th or early 18th century, and has a more modern, plain wedding ring appearance.

An even more perplexing posy ring, found in 2012 by a Mr. Glen Flynn in Monmouthshire read, "God is my cumford (comfort)," further suggesting that this special kind of ring was not only given and worn in times of love and marriage.

The vintage appeal of posy rings has been recognized by several artists, including Monica Rich Kosann, who created a line of posy ring necklaces in support of various charities.

"They were one of the most romantic pieces in history," she says.

She also noted that while she decided to link her collection to posy rings of the past as a means to create an interesting story for clients, a posy ring is merely a ring that has a message.

"The message is the thing. If it has the message, you could make the point that it's a posy ring," she said. 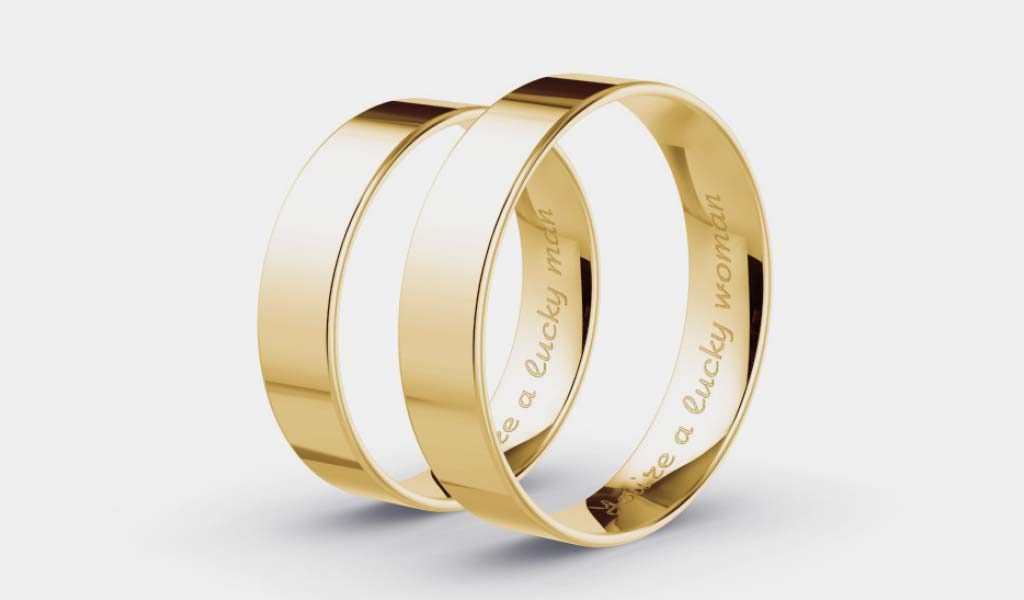 Complete with old English and incorrect spelling, here are a few popular phrases that were inscribed on posy rings:

Re-Creating The Posy Ring for Your Special Day

So, while posy rings are merely what we know today as a wedding ring with an inscription, it's still a lovely look into the history of wedding rings.

Finding these old gems is a way in which to dive into the past, and to take a look at how those in love, friendship, and alliance expressed their feelings to others.

And because it is equally as meaningful and special to place an engraving on a wedding ring today, we have the means to engrave your special wedding ring for you.

Encapsulate your love story with a traditional or modern-day engraving that'll make you smile each time you glance over at your beautiful wedding ring, and keep the wonderful tradition of the posy ring alive.