What is an Eternity Ring?

What do you think of when you hear the word "eternity"? Forever? For all time? Everlasting? Immortality? Yes, in fact, these are all synonyms for the beautiful word, eternity. In this way, an eternity ring almost immediately gives one a positive feeling that encompasses love and meaningfulness.

But some are still somewhat stumped as to what it actually is. So here's our comprehensive guide that'll answer all of your questions.

What is an Eternity Ring?

This ring is a piece of jewellery that has no beginning and no end… hence the name "eternity". It's usually a metal ring made of gold, white gold, or platinum, and is oftentimes decorated with diamonds or gemstones.

A pro of choosing a full ring is the fact that the piece of jewellery can spin around freely and still display a lovely band of stones. It also adds that extra touch of luxury and sparkle. A half ring too has its pros, and is merely a question of comfortableness, budget, and style.

An eternity ring is essentially not an engagement ring nor a wedding ring, but a complimentary ring that you receive as a gift somewhen later. In this way, it is an additional piece of jewellery to celebrate your marriage and maybe a specific milestone. It's a reminder of the past and a symbol of a prosperous future together.

Yet, just as things continue to change, there are many couples who have used an eternity ring as their wedding ring. This ring is then given to their bride at the altar. It is sometimes worn on the same finger along with one's engagement and wedding ring. But some opt to split them across the ring fingers on both hands. Find more information on wedding rings in our article "15 Important Things to Consider When Choosing a Wedding Ring".

In short, an eternity ring is as the name suggests, a piece of jewellery that is the ultimate symbol of everlasting love. 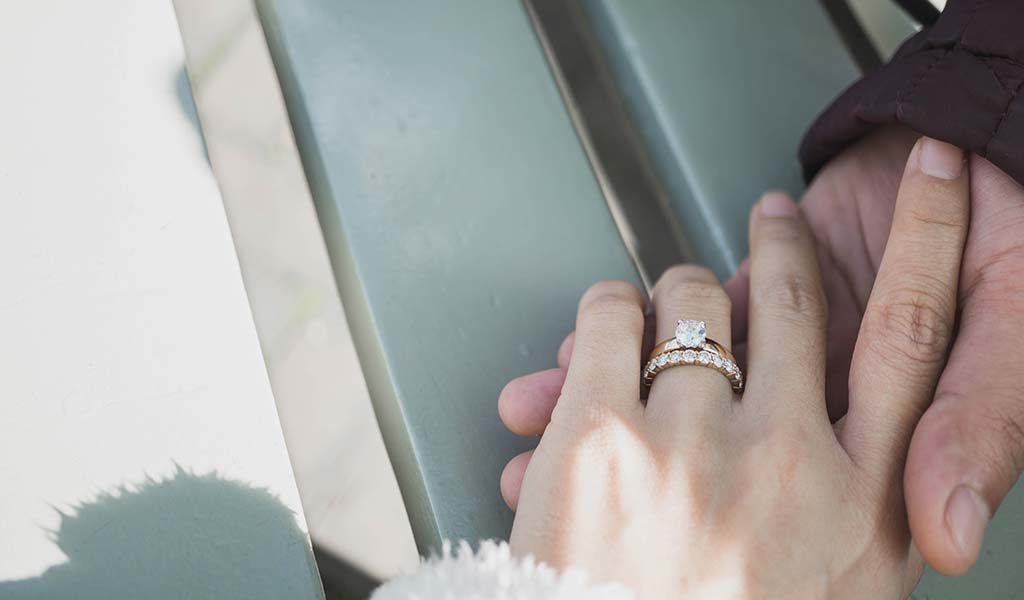 The History of the Eternity Ring

This lovely tradition goes back to the ancient Egyptian times, around 2000 B.C. It was seen as a way in which to symbolise eternity, with the hole in the middle being a passage into the future.

The Egyptians also gifted loved ones with a ring portraying a snake swallowing its own tail, another common symbol of eternity.

While the very first eternity rings were either made of metal or reed, the diamond ring was introduced in the 1960's by the famous diamond cooperation, De Beers.

The company introduced it in order to sell smaller diamonds for already-married and older women, and their advertisement provided a catchy slogan of, "She married you for richer or poorer. Let her know how it's going," in order to market this kind of jewellery.

Who Receives an Eternity Ring?

Most commonly, an eternity ring is worn by women, and is gifted to them from their significant other on a special anniversary. Of late, however, many men are embracing the eternity ring, including that of celebrities such as David Beckham, Cristiano Ronaldo, and Johnny Depp, who have all worn diamond rings as a symbol of marriage or fashion.

Additionally, this ring is oftentimes gifted when celebrating the birth of a new child. In this way it is not a direct celebration of marriage itself, but the journey and growth together.

While many people today believe that bigger equals better, it was not always so. In fact, Hollywood icon, Audrey Hepburn, was a big fan of the eternity ring, and wore it in an understated yet beautiful fashion.

She was proposed to by Mel Ferrer in 1954 with a slim platinum band with baguette-cut diamonds. She then received two wedding rings, one gold and one pink gold, on her wedding day, both engraved with the date of the wedding.

Marilyn Monroe was also a well-known icon who fancied the notion of this ring. She in fact wore one which acted as her engagement and wedding ring when she married baseball player, Joe DiMaggio. Her model was too a platinum ring and had 36 baguette-cut diamonds.

When auctioned off in 1999, Marilyn Monroe's eternity ring was sold for $772,500 (fifteen times the initial price).

Additionally, Elizabeth Taylor got two eternity rings by her husband, Richard Burton (they married twice). The pair of extravagant rings were later sold as part of The Collection of Elizabeth Taylor in 2011 for $1,022,500.

Last but not least, you may or may not know that the popular fragrance from Calvin Klein entitled, Eternity, was actually inspired by the eternity ring. It became one of the designer's most successful perfumes. 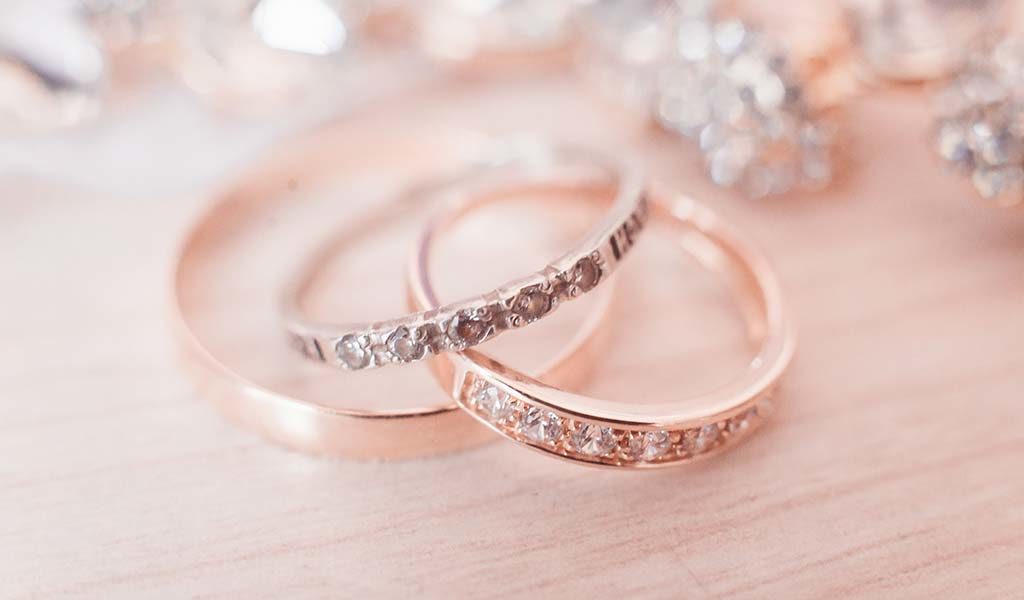 What is the Difference Between an Eternity Ring and an Engagement or Wedding Ring?

Traditionally speaking, it is the fact that an eternity ring has diamonds or gems covering the entirety of the ring that makes it different to an engagement or wedding ring. This kind of full diamond ring is seen as the most luxurious in the jewellery world.

Today, however, half eternity rings are rising in popularity.

What is the Difference Between an Eternity Ring and a Promise Ring?

While both an eternity ring and a promise ring both symbolise eternity, there are some noticeable differences between the two.

An eternity ring is a piece of jewellery that the bride receives on a special occasion or as a gift to celebrate a relationship milestone. This ring oftentimes has a similar appearance to that of a wedding ring, and is a sign of romance and intimacy between two partners.

A promise ring can be given to another as a promise of commitment and oftentimes, love, but can also be a gift given to someone in a non-romantic fashion. For example, it can be a symbol of friendship, dedication, or even hold important religious significance. This ring varies in design, depending on personal taste and preference.

Another way in which to have your perfect ring is to choose your favourite metal. Three of the most popular choices are:

This kind of metal is luxurious and the rarest metal on earth. By choosing platinum for your ring, you'll have a beautiful piece of jewellery that shines with brilliance and sophistication. What's also great about platinum is that it's durable and dense, making it a great choice for everyday wear, and it is kind on sensitive skin.

This is a more affordable type of metal and has been a big hit for jewellery-enthusiasts since the 1920's. To create white gold, yellow gold is alloyed with silver or palladium and rhodium-plated, which will then create a white gold appearance. This kind of metal looks effortlessly beautiful among colourful gemstones and diamonds.

Yellow gold is a more traditional option which creates a warm backdrop for diamonds. With an 18-carat yellow gold ring, you'll have a tarnish-resistant and durable piece of jewellery on a kind budget. 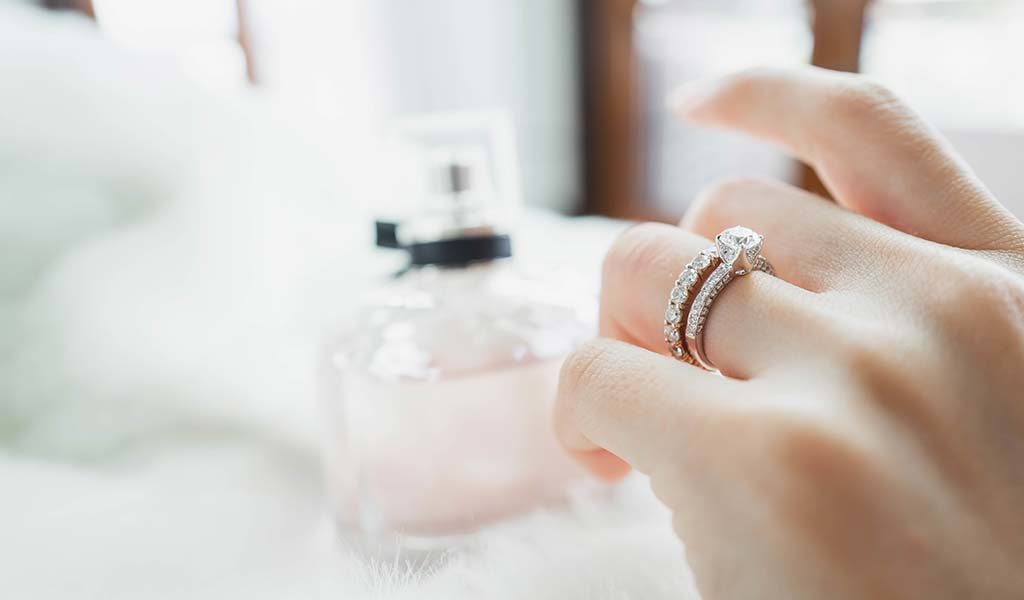 You have the ability to choose an array of different designs. If you're interested in a half eternity ring, you could decorate it with less stones that are larger in size. Or you could choose a full design which encircles the entire circumference of the ring with diamonds.

The most traditional eternity ring design is that which is decorated with diamonds. This is because it's one of the most romantic symbols of love. And because it's a rare and precious stone that is unique.

If you decide to choose diamonds for your ring, the most popular shape is the round brilliant diamond. This classical choice has an excellent way of sparkling sensationally when receiving the maximum amount of light.

Alternatively, a princess cut diamond - which is a square shape - is a popular choice. Here you can arrange the diamonds closely together. In this way, your ring can resemble an almost seamless circle of gorgeous diamonds across the finger.

Choose a gemstone instead of a diamond if you absolutely adore a certain type of gemstone. For some, a coloured stone is the perfect way in which to add character and uniqueness to an ring, especially if that stone is one of their favourites.

How do You Wear an Eternity Ring?

There isn't any formal rule that says how one should wear this ring. However, many recommend that it should be the last ring on the ring finger.

Traditionally, you would wear the wedding ring first, as it is closest to the heart. Following that, the engagement ring which then protects the wedding ring from coming off. Lastly, place the eternity ring as the third and last ring on the ring finger.

Then again, many a couple are opting simply for an eternity ring as opposed to an engagement and wedding ring. So it really is up to the giver and receiver to decide.

It's also a question of practicality and preference, as you will wear your ring every day.

With that, we hope that we've helped you find the perfect kind of eternity ring that suits your style and desire. One that's not only beautiful but also unique in order to celebrate the special love that you and your partner share.